Beating Donald Trump won out over revolution. Joe Biden and the Democratic Party’s elected officials and establishment want to take on Trump without the distraction of controversial and untested hyper-expensive proposals. They also fear the reputational baggage Bernie Sanders carries for the entire Democratic ticket, especially new House members and aspiring Senate candidates. 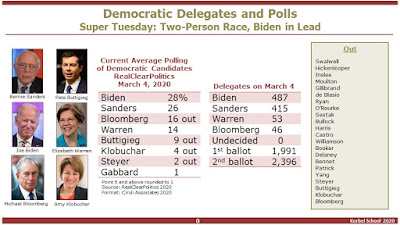 The battle is not over, but Biden is now the frontrunner. The Democratic effort to unify will have to deal with some major problems: Bernie Sanders’s irascible, anti-establishment temperament, his many extreme supporters and several upcoming states on the schedule that look like California and Colorado.
Posted by Floyd Ciruli at 4:29:00 PM