Biden Moving Toward Delegate Majority. Does Sanders Stay in?

Joe Biden’s triple state win Tuesday night has him at 1,147 delegates toward the 1.991 majority he needs for the nomination (57%). There have been three significant Tuesday primary events starting with Super Tuesday, which Biden won over Bernie Sanders by 10 states to 4. Next, March 10, when Biden won 6-to1 vs. Sanders, and now, March 17 where Biden swept all three states in play. Florida was the big win. Ohio delayed its event due to coronavirus. 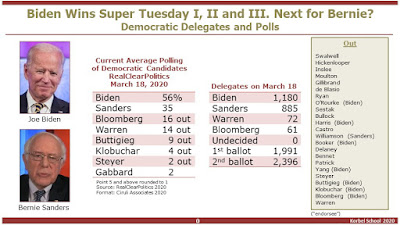 Tuesday’s results confirm what has been evident since March 3, Super Tuesday: Sanders will not be the Democratic Party’s nominee. He’s running far weaker than four years ago and his core support group – under 45 years olds – are not turning out in numbers to make a difference. Now the question for Democrats is how to get him out of the race with minimal damage and some upscale benefit.
Can Sanders find an exit strategy that leaves him a player and not a party wrecker?
Posted by Floyd Ciruli at 9:41:00 AM