The timing of the coronavirus crash couldn’t be worse for President Trump’s re-election. Just as the Dow, which he reports on regularly, approached 30000, the coronavirus hit our major trading partner, China, and then spread worldwide, including America. The Dow, with its 1000- to 2000-point swings, has been as low as 23851, or near a bear market (off 20%).

Trump was benefiting from the market and robust economy as Republicans began to feel confident on his re-election. His approval was up, foreign policy seemed calm and Democrats were in an internecine war. 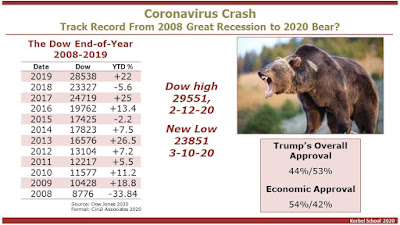 The market’s immediate problem is the broad slowdown in economic activity as social distancing; i.e., lockdowns, quarantines and isolations, and simple reluctance to travel or be in group settings will damage the tourism, hospitality and entertainment industry.

But beyond several months of a likely virus-related slowdown is a view that nationalism is now dampening international trade, volume and relationships. A worldwide recession is suddenly more likely as private and public financial institutions lower their 2020-21 growth estimates.

Trump’s particular problem with this crisis is that his personality and political tactics are ill-suited for crisis management. The chaos and conflict that have carried the administration for more than three years now appears a burden. In fact, his talent for his credit-taking, blame shifting, distraction and bullying are counterproductive. Even his favorite stage is endangered – the MAGA rallies may be banned as unhealthy.

Unfortunately for Trump, even with a roaring economy, his approval rating remains below 50 percent, mostly a reflection of broad public disapproval of his non-presidential tone and deportment. Trump and the economy are likely to recover enough to make the 2020 election a close fight, but this market shock hits voters’ economic confidence hard and damaged the administration’s image of being in charge.
Posted by Floyd Ciruli at 10:27:00 AM