The Elasticity of Battleground States

A theory had developed that states that receive the most attention in presidential contests, once they are apparently locked down by a candidate, tend to stick with the candidate if the national polling tightens or even shifts leaders.

In 2012, when President Obama lost the first debate to Mitt Romney, the national polling lead briefly changed and stayed tight (2 points for Obama) to the end. Obama won by 5 and carried all of his battlegrounds except North Carolina. Due to his battleground states staying with him, such as Ohio, the race was never particularly in doubt and several prognosticators appeared prescient.

This year, however, battleground states are moving much more in tandem with the national average. Colorado, thought to be safe for Hillary Clinton in mid-August, turned into a one-point race at the end of September. Florida, North Carolina and Nevada have all recently flipped frontrunners. And given Donald Trump’s poor debate performance and post-debate controversies, both national and battleground polls are rapidly, if not hugely, shifting.

This year, battleground states are highly elastic or sensitive to shifts in the national polling average. It appears control of the national narrative is more important than ground games and local advertising and endorsements. 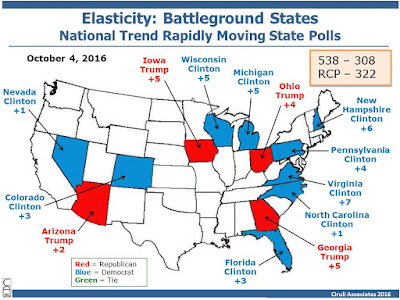