Will Marijuana be Legal in Colorado January 2013?

Legalizing marijuana will be on the 2012 ballot.  It could pass.  A Colorado PPP (robo) poll in August 2011 showed marijuana legalization winning 51 percent to 38 percent, and a December survey had it ahead 49 percent to 40 percent.
Colorado voters have had mixed views on marijuana.  They legalized medical marijuana in 2000, but voters tend to be hostile to local dispensaries.  And, an initiative to legalize small amounts for recreational use failed 60 percent to 40 percent in 2006. 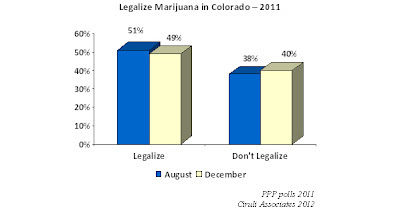 California tends to be frontline for drug political activism.  In November 2010, California voters rejected Proposition 19 legalizing marijuana.  But, in a November 2011 PPP California poll, marijuana appeared to have a slight edge, if not majority support – 48 to 42 percentage points.
And nationally, tolerance for recreational drugs is growing.  A December 2011 national Gallup poll showed 50 percent support legalizing marijuana, up from 36 percent in 2006.
Although Colorado voters are closely divided, out-of-state dollars in favor of legalization could push the issue over the top.  One unknown factor:  What will the local medical marijuana industry do?  They have money and may not want competition.
District attorneys, MADD, parent groups and church leaders may not be effective opponents.  It’s not clear they will raise money and build an organization.  On the other hand, proponents look and work like the Ron Paul campaign (early version).
See Public Policy Polling:
Colorado favors gay marriage, marijuana use, love Tebow
Colorado loves Hickenlooper, Bennet would rout Buck in re-do
California favors gay marriage, legal marijuana
Posted by Floyd Ciruli at 10:25:00 AM

Such an interesting story to read and I enjoyed reading it as well. Keep up the good work. Spice Tropical