President Obama begins his campaign for re-election with 44 percent of the Denver metro vote, far below his vote in 2008 (61%) or his 54 percent statewide win over John McCain.  In a new Ciruli Associates poll, Obama has a 14-point advantage in the Denver metro area over Romney, but it is largely a product of 17 percent of voters preferring some “other candidate.”  While he won the state by 9 points in 2008, he was winning a landslide 29-point victory in the metro area, taking every county except Douglas.
Mitt Romney’s first challenge will be to unify the Republican Party.  The poll, completed the day rival Rick Santorum quit the race, had 18 percent of Republicans picking “other” for a candidate.  (Gallup reported that Santorum had 24 percent of Republicans nationally supporting him at the end of his campaign.) 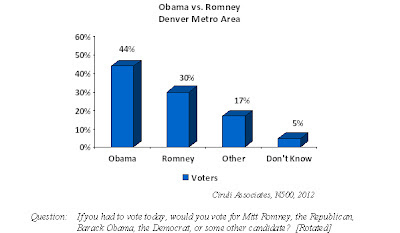 Although a number of polls have shown Obama ahead in swing states and a recent Colorado PPP robo poll has Obama ahead of Romney by 13 points statewide, 52 percent to 40 percent, most analysts believe if the national race is close, Colorado will be within a couple of points (see latest Gallup poll: 45% Obama to 47% Romney; and New York Times:  46% Obama to 46% Romney).

In the metro area, Obama has unified his base, receiving 89 percent of Democrats.  Romney only gets 67 percent of Republicans.  Also, Obama is carrying independent voters by 12 points.  An “other candidate” is selected by more than one-quarter (27%) of independents, suggesting there is room for a third party candidate in Colorado.

The survey of the seven-county metro area voters was conducted by Ciruli Associate for the blog, The Buzz, using RDD probability sampling with 500 voters from April 6-10, 2012 (±4.4 percentage points).
Posted by Floyd Ciruli at 11:30:00 AM

Thank you! for give me metro aria info it is very helpful me and my friends.Detroit Airport Taxi