Arapahoe County made the biggest contribution to Michael Bennet’s senate victory in 2010, and is now the state’s top battleground county.
The Denver seven-county metro area makes up about 55 percent of the state’s vote.  In 2010, it provided Democrats with 61 percent of their votes and Republicans 49 percent of their votes.
When Michael Bennet won a 30,000-vote victory in the 2010 senate race, it was a combination of drop offs in Republican Ken Buck’s potential vote and a smaller swing to Bennet that made the difference, and if polls were accurate, the shift took place the last two weeks.

A comparison of the senate race with Walker Stapleton’s race for State Treasurer against Cary Kennedy shows that Buck suffered a 22,000-vote drop off in the Denver metro area from Stapleton’s vote, with the largest shift in Arapahoe, Adams and Denver counties.  Douglas and Jefferson counties were Bennet’s largest pick up of votes over Kennedy.  He gained 12,000 votes.  It was the drop off that caused Buck his biggest problem. 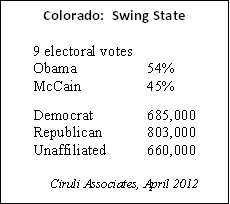