Trump Can Run for President. Not Good News for Republicans in 2024.

The Republican Party’s preferences concerning Donald Trump are a reverse of the American people’s.

A new poll by Quinnipiac University confirms what many polls have shown with a couple of nuances. Former President Donald Trump has overwhelming support among Republican Party identifiers. Trump is the dominant figure in the party, even if not on a visible or official platform today. His endorsements will be especially powerful in the 2022 elections. This poll suggests the Republican Party is Trump subsidiary.

But, there is a problem. The American people – a majority of whom were never sold on Trump (he never got over 50% approval) – say they do not want him to run again, do not prefer candidates who mostly agree with him and believe Biden was legitimately elected. 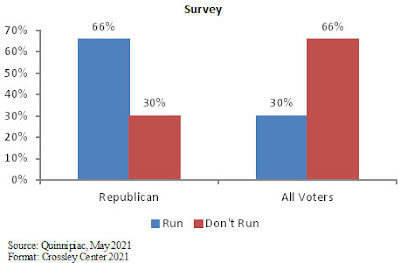