Gun Policy is Stalled Because Americans are Closely Divided on Enforcement

On a number of critical attitudes that lend support to stricter gun legislation, the public is either ambivalent as to the law’s efficacy or divided often on partisan and race or ethnic factors. For example, although half (49%) of the public believe gun violence is a “big problem,” only 39 percent of Whites believe that it is compared to 82 percent of Black adults and 58 percent of Hispanics. Importantly, only 53 percent of Americans say gun laws should be “more strict than they are now.” And the issue is polarized on partisan line with 81 percent of Democrats in favor of stricter laws, but only 20 percent of Republicans. In fact, there were more Republicans (27%) in favor of “less strict” laws than more (Pew Research, April 2021). 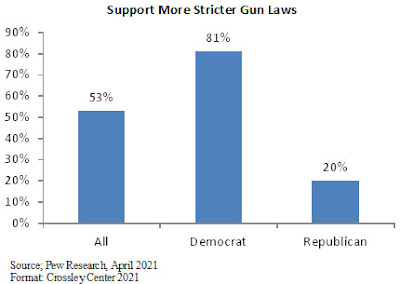 Possibly the most serious restraint on legislative action is the public’s ambivalence as to the efficacy of the laws. The public is closely divided as to whether or not gun laws work either to deter mass shootings or to reduce crime in general. It is very hard to build majority support for legislative action when the public is closely divided and polarized on the proposed solutions and doubtful as to their effectiveness.