Prime Minister Netanyahu has accomplished much since the last Gaza war between Israel and Palestine in 2014. But circumstances are moving away from him. One of his primary advantages the last four years was the Trump administration, and it’s now gone. The new American government is attempting to restore negotiations with Iran and is much more interested in leading world opinion on democracy and human rights issues, which are at the core of the dispute. In addition, it is sensitive to the pro-Palestinian faction in the Democratic Party.

Although Israel still has considerable support among Americans, Netanyahu’s alignment with anti-Iranian Republicans and former President Trump has made that support vulnerable to the partisan shifts in American politics. In addition, the rise of the racial/ethnic justice movement, especially since the George Floyd demonstrations, has shifted sympathy to Palestinians as an oppressed population of color among the activists left. Progressive spokesperson and New York Congressperson Alexandria Ocasio-Cortez has been highly vocal defending Palestinians and criticizing the Biden administration for not calling for an immediate cease fire.

Overall, 58 percent of the public favor Israel in the dispute, but only 43 percent of Democrats versus 80 percent of Republicans. Democratic support is vulnerable to shifting away from Israel. (Gallup, March 2021). 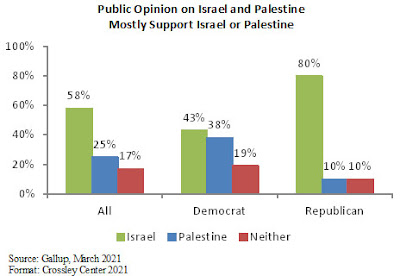 Although the current crisis has receded, the underlining correlation of forces is not moving toward the Israelis.