Donald Trump believed his re-election was assured regardless of the public dislike of his personality, much of his behavior and some of his policies because the stock market was up. Adjoined with his claim was that if Joe Biden was elected, there’d be a market crash and pension fund losses. He was wrong on both claims. The stock market recovered strongly after the pandemic-caused downturn, but it wasn’t enough to make up for the public’s assessment of his COVID-19 mismanagement. Also, contrary to his prediction, the market has continued to climb since Biden became president, up 10.5 percent as of April 21, 2021.

President Biden has been rewarded by investors because he adopted a limited focused strategy. He prioritized the essential elements for concerned Americans and the economic recovery: get everyone vaccinated and put money into the economy. One additional priority he’d like to pass – infrastructure – has elements his liberal base want and items he believes are needed to compete with China. He’s already signed is a stack of executive orders, which undo the most aggravating Trump policies, and finally, he’s had an aggressive appointment process that has brought in a diverse group of ready-to-go professionals.  So far, the Democratic Party is holding together.

The market likes this approach. So do the polls. Biden remains at the mid-50 percent level, a near miracle in these polarized times, and ten points ahead of Trump four years ago. 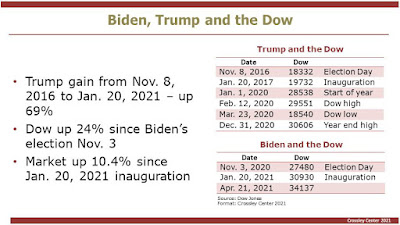