Can China Be Deterred?

From the East China Sea to the South China Sea, including Hong Kong and Taiwan, the risk of conflict has increased in recent years. Can a cohesive alliance strategy hold off China’s mounting aggression on territorial disputes? Can deterrence prevent war?

The Crossley Center for Public Opinion Research, with the University of Denver’s Josef Korbel School of International Studies, and the Consulate-General of Japan in Denver, assembled a panel of experts on March 31 that discussed the threats and options for the U.S.-Japan alliance. The panel focused on the issues that have made Asia the U.S.’s primary foreign policy arena, Japan its critical ally, and China the competitor. The first trip abroad of the American Secretaries of State and Defense were to their counterparts in Japan. Japanese Foreign Minister Motegi said on March 16th that the “free and open international order is greatly challenged by attempts to change the status quo by force and progress of authoritarian system.” Secretary Blinken agreed: “China uses coercion and aggression to systemically erode autonomy in Hong Kong, undercut democracy in Taiwan, abuse human rights in Xinjiang and Tibet, and assert maritime claims in the South China Sea that violate international law.”

The panel was moderated by Floyd Ciruli, director of the Crossley Center. The panelists shared these key points: 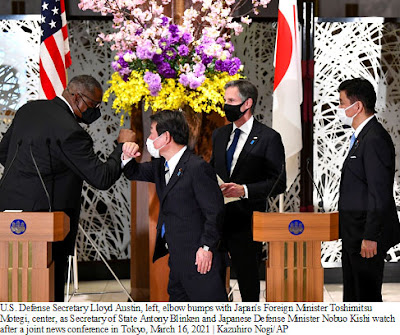