The extraordinary one-year bull market continued into the first quarter of 2021. The Dow was up 7.8 percent at the end of March, or more than 2300 points above the record high of 30606 at year-end. The 2009 11-year bull market ended abruptly on March 23, 2020 during the pandemic plunge (20% down). But, it was restored by August 18, 2020 when a 52 percent climb crossed the previous high. The five-month bear market was only a blip in the extraordinary climb in stock indexes for more than a decade. The brief bear market had little impact on the averages, which all ended 2020 higher (Dow 7.2%, Nasdaq 44%, S&P 16%).

Typically, the first year after the start of a new bull market is good for the Dow. Specifically this year, investors – both institutional and individual – perceive continued low interest rates (1.9% 10-year Treasury) and a major economic recovery from increasing vaccination rates and a second $1.9 trillion stimulus expenditure as ensuring continued stock valuations.

If there is a caution signal, it relates to the accelerated pace of the recovery and the pressure on prices (oil for example) and bond yields, which nearly doubled since years-end. 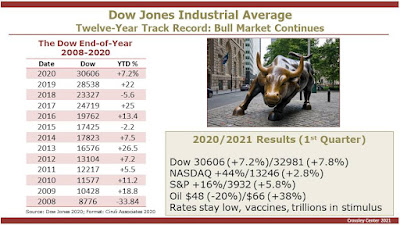