January 6, 2021 was a 9/11 event for democracy. The transition of power – a bedrock element of American democracy from George Washington through Barack Obama – was directly challenged by a mob motivated, assembled and inspired by President Donald Trump, his family and retainers. A webinar sponsored by the Boulder OLLI Speaker Series on February 3 will examine the crisis of democracy in America. 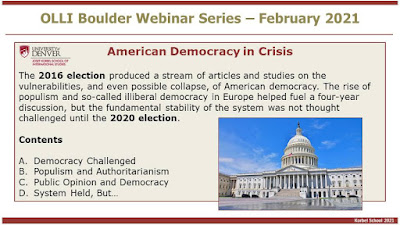 Although after four years of the Trump presidency, American democracy held, it is damaged and serious threats lie ahead. Strong, dramatic and collective action will be needed to repair it.