Staging the First 100 Days from the White House

Donald Trump staged the first 100 days from the White House, except for a few trips to his winter retreat at Mar-a-Lago and campaign-style forays. After 100 days, the Trump White House operates much as it did in its earliest days. Some describe it as a family-run commercial real estate firm. The distinctive features of the first weeks are captured in an early picture of the President signing the Executive Order to proceed on the XL and Dakota Access pipelines. The days were filled with drama, much of it around the Resolute Desk and, although there was a variety of participants in the room, there was always a cameraman, and initially the early photos were dominated by the campaign team hovering in the background. 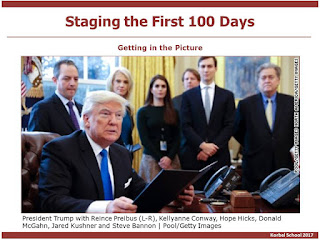 Flat decision process. There is no chain of command. Trump is the star, he decides. Chief of Staff Preibus has some staff, but clearly he doesn’t control access or the agenda.

Centers of conflict. There are numerous power centers defending turf and viewpoints. Competition between nationalist Steve Bannon vs. globalist Jared Kushner is the highest profile conflict, but Preibus has his turf, Kellyanne Conway has hers.

Stay close to the desk. Trump is a mercurial man who tends toward the provocative and the impulsive. If you want to defend a position, an initiative or a space, stay close to his desk. The last person who talks to him often has the most influence.

Keeping the promises. Keeping campaign promises is an obsession with the Trump team. Bannon is in charge and has the list on his wall; he checks off accomplishments, or at least some action. That means that some of the most divisive and least popular campaign promises are high on the White House agenda, such as the wall and travel ban. But, it also means the campaign, with all its bad attitude and mean rhetoric, has moved to the White House.

In addition, the campaign for 2020 has started. The Pennsylvania rally had placards that said “Promises Made, Promises Kept” and TV advertising extolling the 100 days is starting.

‘Un’Obama. Finally, much White House activity is driven by being the ‘un’Obama. From the Inaugural argument over crowd size, to staging a picture of the national security team watching the Tomahawk Missile strike on Syria outdoing Barack Obama’s Bin Laden picture, this White House spends considerable time contrasting itself to Obama. But it also means that Obama is blamed for the need for or the failure of every action. “Obamacare is a disaster; look at the mess I inherited; this is the worst deal in history.” From Syria, to Iran, to the travel ban, to General Flynn’s security clearance, Obama was at fault.

Of course, all presidents do it to some extent. Herbert Hoover was a Democratic punching bag for four decades. Obama mentioned George W. Bush repeatedly as he reversed various foreign policy initiatives, but the volume and repetitiveness of it was minor compared to the barrage of criticism today.

The first 100 days have had some success, but it has mostly been characterized by a lack of preparation, acting precipitously and disorder. Will the second 100 days be the same as the first? Clearly the White House is improving its operations. The leaks are down and there appears more calm, but Donald Trump is the star and the decider, so it’s very much going to be based on his personality and preferences. We shall see.