Even as Castro’s Cuba achieves recognition and overtures of friendship from its longtime capitalist adversary, the left wing tide of governments of Latin America, which surged in the last decade, appear to be receding. Stagnant economies, spectacular scandals and increasing authoritarian measures are diminishing their support among workers, students, and financial and media elites. 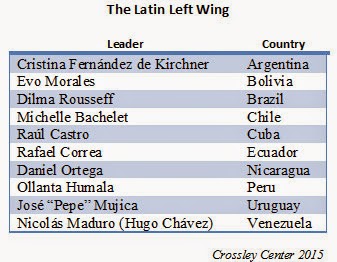 Although the circumstances of the Latin left are different in each country, they have generally been united in their socialist orientation, anti-American rhetoric and preference for non-Western trade and diplomacy.

Not every left-leaning government is in crisis; however, the main players are in trouble – Argentina, Brazil and especially Venezuela. With commodity prices in decline and easy money tightening, the Latin left’s economic model may have hit its high point in the latest cycle of socialist ascendance. And, although the Cuban regime is receiving a short-term bump in survivability, the one-party socialist system will be severely challenged with the growth of American money and visitors in Cuba.
Posted by Floyd Ciruli at 11:08:00 AM