Colorado Presidential Primary – Had One, Dropped It

Colorado tried a presidential primary for three nominating contests, did not consider it much of a success and dropped it before the 2004 election when paying for it became a state budget burden. 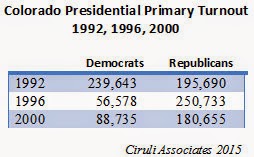 With the exception of the 1992 primary, Democrats got more participation in the 2008 caucus when 120,000 turned out in the Obama vs. Clinton fight. And, it’s likely any primary in 2016 will bring out more Republicans, who have a wide open contest, than the Democrats who, as of now, have no contest.

More Republicans participated in Colorado’s three primaries than Democrats, even with mild contests. But even with a primary only, about a third of the party voted. The first President Bush beat Pat Buchanan handily in 1992 and the 1996 contest was mostly over by the time of the Colorado primary, with Bob Dole beating Buchanan and Steve Forbes two-to-one. Same was true in 2000 when the second President Bush had already won the contest with John McCain.

Democrats in their big 1992 turnout gave a boost to Jerry Brown, with Bill Clinton and Paul Tsongas in close pursuit. The lack of a contest in 1996 (Clinton’s re-election) and the race being over in 2000 (Al Gore vs. Bill Bradley) produced lackluster participation.

Competition and timing are necessary to get voters engaged, especially Democrats. In 2008, the Democratic caucus had record turnout and was one of the important victories for Barack Obama. Republican caucus turnout was higher than usual in 2008 when Mitt Romney won against McCain and in 2012 when Rick Santorum led Romney and the field. 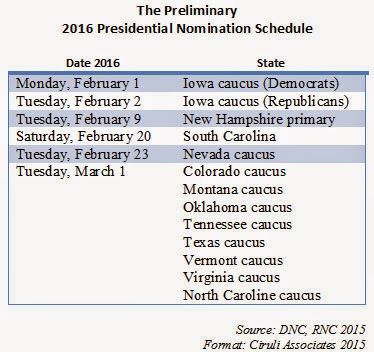 Shifting Colorado to a primary might be justified as a measure to give more voters the ease of participation, but given that, at the moment, Colorado’s nominating event is being held simultaneously with eight other states, it will most likely not produce more interest from the media or the candidates.