Public Opinion is on the Move

Panic hit the Republican Party in Washington last Friday with the Wall Street Journal and NBC News publication of a poll showing that the shutdown not only was a failed strategy, but that public opinion was on the move.

Americans have disapproved Washington and its major governing institutions for several years, but in the last two weeks, disapproval shifted to pure disgust, and the Republicans were the main recipients of it. 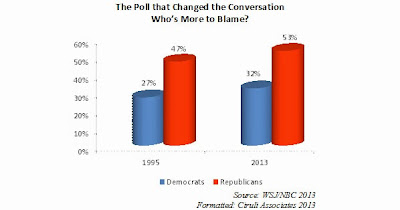 As Professor James Stimson (University of North Carolina) wrote in his public opinion classic of 2004, The Tides of Consent: “It is the movement [of public opinion] that matters.”
His analysis of the 1995 shutdown is worth rereading because it describes many of the similar elements to the current crisis, except that most of the indicators are worse today. Republicans are receiving the bulk of the blame and people believe the problem is more serious (73% today compared to 57% in 1995).
The movement away from the Republican Party has been massive the last four weeks. Negative feelings shot up from 43 percent in September to 53 percent today, while President Obama’s numbers improved slightly – all very similar to 1995. Recall that Speaker Newt Gingrich and his Republicans declined in approval and President Clinton recovered from his poor numbers post the 1994 midterm disaster.  Even if early, bad omens for 2014.
The Metrics – WSJ/NBC Poll
The shutdown:
Posted by Floyd Ciruli at 2:31:00 PM