Hickenlooper Looking for a Bigger Win

As Governor John Hickenlooper approaches his re-election, he would like to exceed the weak 51 percent win of 2010. The narrow margin was a surprise in some ways and expected in others.

Although he faced a very weak field between Dan Maes, the discredited Republican nominee who barely received double digits (11%), and former Congressman Tom Tancredo, who ran as an independent (36%), 2010 was a Republican wave year and nearly swept away everything in front of it.

Hickenlooper’s polling was never that high, no doubt reflecting his lack of statewide exposure (no previous election, no primary), the continued close division of Colorado politics and the good Republican year.

Unfortunately for Hickenlooper as he begins his re-election, several factors have kept him on the defensive. In his own party, his support of natural gas production and fracking makes him the recipient of much public berating from anti-hydrocarbon activists. His handling of the Nathan Dunlap reprieve was broadly panned and the Democratic legislative session was judged by many as too aggressive with insufficient gubernatorial restraint (no vetoes). Gun rights activists have targeted him and Republicans, in general, have gotten more engaged in defeating him.

In recent history, Colorado governors have been re-elected by solid percentages, often above 60 percent. 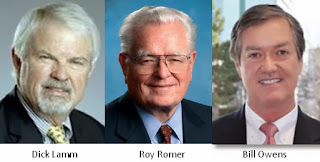