Democrats could pick up three of the four seats they need to take control of Senate. If they win all three, Democrats would have a bloc of 7 western states out of 11 and control both members of the delegation (14 members), or about a quarter of their Democratic senate majority. Forest management and climate change would move up in the priority list.
Among the competitive western states, Republican incumbent Martha McSally (Arizona) has been consistently behind Mark Kelly (up 7 points, RealClearPolitics). President Trump won the state by 3 points in 2016, but has been behind Joe Biden (now 5 points). The map below is the latest from Larry Sabato’s Crystal Ball forecast at UVA. 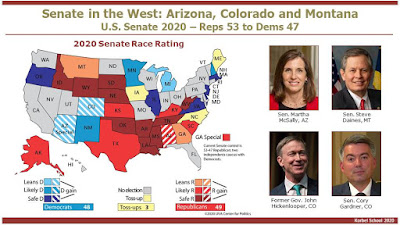 Colorado may be the keystone state for Democrats to win the Senate. John Hickenlooper appears to be ahead of Cory Gardner by about 5 points in spite of an inarticulate candidate and an onslaught of negative Republican advertising. He is riding the reverse coattails of Donald Trump, who is losing the state by at least 10. He lost the state to Hillary Clinton in 2016 by 5 points and would be very lucky to get that close this year.
Montana is a more difficult state for the Democrats. Trump won it by 20 points in 2016, but is only ahead today by 6 points. And, Steve Daines, incumbent Republican senator, running against the current Democratic governor, Steve Bullock, is 2 points ahead. In Montana, Trump helps Daines.
Other races Democrats have good chances and rated as “toss-ups” by Sabato are Maine: Susan Collins -6, Trump -1; North Carolina: Thom Tillis -4, Trump -1; and Iowa: Joni Ernst -1, Trump +2.
Posted by Floyd Ciruli at 4:06:00 PM