A second poll in the 3rd Congressional District has the two congressional candidates and President Trump in a two-point race. The Cook Report, a political forecaster, just shifted the race to “lean Republican” from “likely Republican.” The poll findings are a surprise. Republican presidential candidates win the district. Trump swept the district by 12 points in 2016 against Hillary Clinton and the recently defeated incumbent Congressman Scott Tipton won the district in 2018 against the current Democratic nominee making her second run by 8 points.

The two polls – by different Democratic-associated research firms and sponsored by the candidate and party’s federal PAC conducted a month apart – show nearly the same result. Democrat Diane Mitsch Bush is slightly ahead of her Republican opponent, Lauren Boebert, fresh from defeating the incumbent. Trump and Joe Biden are tied in both polls. (See chart below)

The Trump number is only believable because a host of polls conducted all year show him losing the state by 10 points or more; hence, in the 3rd Congressional District, he could be running even. The political forecasters, primarily looking at voting history, have rated the district as they would with Tipton in the field, but with less certainty, and the recent polls are adding more doubt. In a July Buzz post, I asked: Tipton is gone, can the Republicans hold the seat? That is still the question. Clearly, unless Trump or Boebert change the dynamics of the Colorado race, Trump will not only lose the state, which is considered very likely, but also cost the party one of its congressional seats. 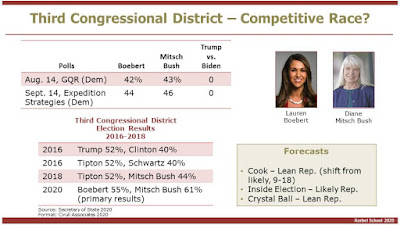