Observers have suggested that this is one of the origins of the enthusiasm gap between Biden and Trump (20% difference between “strong support” for Trump – 66% over Biden – 46%). But, it also reflects the contradiction in Trump’s basic strategy. The more he campaigns, especially on his instinct and with his aggressive rhetoric, the more he strengthens Biden’s base and alienates independent voters.

For example, the thrust of the Trump convention and post-convention strategy is law and order. And indeed, Americans oppose the violence they see and read about on the news and newsfeeds. But, when asked if what the candidates are saying about protests is making the “situation better, worse or doesn’t have much of an affect,” 55 percent say Trump makes it worse, including 26 percent of Republicans, 79 percent of Democrats, and importantly, 53 percent of independents. Only 13 percent of the public believes he’s helping. 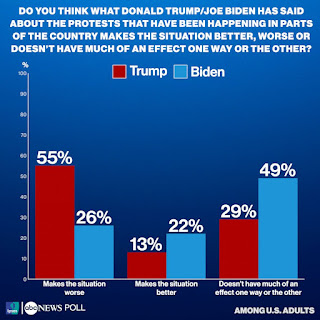