During the month since my June 10 report on world fatalities, more than 160,000 new fatalities have been recorded worldwide (a 40% increase), even after much of Europe had slowed the infection rate in June. Brazil has become the leading breakout country, moving into second-place for fatalities, ahead of the UK, with a 67 percent increase during the month. Mexico, which had just made it to the top seven countries on June 9, has leapt ahead to fourth place, more than doubling of its fatalities (see figure below). 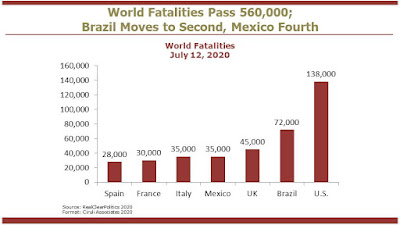 Both countries are led by controversial leaders refusing to follow the advice of their medical scientists. Jair Bolsonaro, Brazil’s newly elected populist, right-wing nationalist president, believes the economy is the top priority, does not support masks and has run through two national medical advisors. Mexico’s populist leftist president also shuns medical scientist advice, initially suggested a scapular would help, tends toward long political press conferences, in which he encourages moral behavior, but doesn’t advocate or accomplish much in terms of health policy or capacity.

Finally, in the U.S., even as the death rate has declined, more than 20,000 died, putting the total at 138,000. The recent upsurge has been attributed to early openings of the economy without sufficient social distancing and masks. America’s high decentralized approach with President Trump primarily encouraging people to get back to work has led to significant outbreaks in Florida, Texas and California, along with some other hotspots. Although the President, Vice President Pence and the White House tend to refer to the current surges as embers, the economy is beginning to feel the result as several governors are having to back off their opening decisions.

The U.S.’s reputation for managing this crisis has now become so poor that Europe is not welcoming American tourists. Possibly the biggest embarrassment for Trump is that Mexico is closing the border.

See The Buzz:
World Fatalities Pass 400,000; Brazil Moves to 3rd
Open for Business and Living With the Risk
Posted by Floyd Ciruli at 11:11:00 AM