China and U.S.: Moving from Cooperation, to Competition, to Confrontation

The U.S. and China relationship is in one of its most confrontational stances since President Nixon visited the People’s Republic in 1972. China and its handling of the coronavirus may be a key issue in the November presidential campaign. A propaganda war is being waged by both sides and both parties in the U.S. It is accompanied by a growing standoff in the South China Sea, a fierce economic competition with retaliatory tariffs, and accusations of spying and secrets thefts.

The relationship, improved after Nixon’s visit, has had warm and cold periods. But in this century, it has become much more fraught with conflict. The rise of China’s economic and military power and the presidency of Xi Jinping have led to a shift from competition to confrontation, especially after the election of Donald Trump. 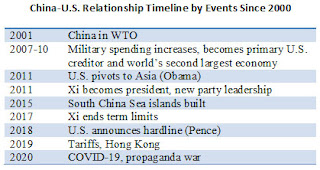 Americans have increasingly negative views of China. A recent Pew Research poll shows the dramatic recent surge of unfavorable ratings to a historic high since data has been collected in 2005. It reflects a host of issues and the views of Democratic and Republican adherents.

In follow-up questions, Pew identifies, along with the pandemic, job loss and the trade deficit as key concerns, along with environment factors and human rights abuses. Although Republicans have more negative views of China (72% negative), Democrats also have an unfavorable view (62%). 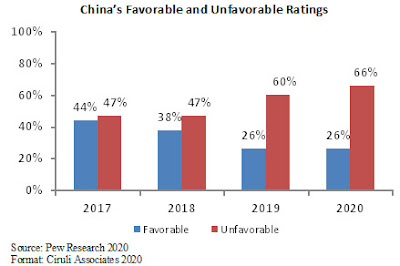