After weeks of showmanship at the Coronavirus Task Force briefings, President Trump has finally exhausted the patience of even his strongest supporters. Near uniform advice has told him to stop, and at least for the moment, he has. Probably the final misstep, which panicked his re-election team, was the disinfectant and sunlight cures he recommended on Thursday, giving rise to thousands of cartoons, memes, and online and late night jokes. 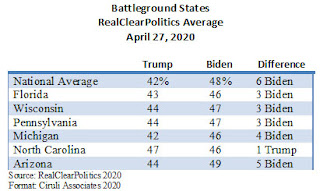 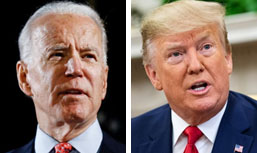 What got Republican leaders’ attention were polls showing Trump losing battleground states, including many that have senate races. Since the last time this blog was posted, Trump lost one percent nationally and remains behind in several key states, such as Wisconsin, Michigan and Arizona. Arizona is still five points to Joe Biden, and Florida, which on April 17 was a toss-up, now has Biden up by 3. In Pennsylvania, Biden’s lead has stretched to 7 points, making it at this point nearly out of play.

Also, the latest polls show a demographic group that had been in Trump’s camp – seniors – are now a problem. He won them by 9 points in 2016 (Pew Research) and now is behind Biden by a similar amount in many national polls. Even in Florida, a state Trump desperately needs and has worked hard to secure, he’s running behind among seniors in a new poll by 10 points (Quinnipiac 2020).

Of course, it’s very early and Trump won the late deciders in 2016, but the alarm bells are going off for the RNC.

Read The Buzz: Democrats Unifying as Close Race Begins
Posted by Floyd Ciruli at 9:56:00 AM