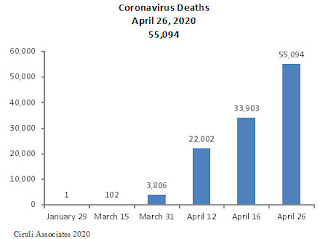 With the latest unemployment claims of 4.4 million, the total now stands at 26.5 million. Economists believe that would translate today into about 16 percent unemployment rate. It exceeds the 22.4 million jobs created since the end of the last recession. Not surprising, we are beyond the unemployment impact of the 2008-09 Great Recession, which hit 10 percent with 9 million unemployed. It clearly exceeds the last downturn and brings to mind the 25 percent rate during the early 1930s. Many of these are temporary layoffs and may be re-employed quickly after the shutdown recedes, but the speed and depth was a shock to most economists and their historic models. 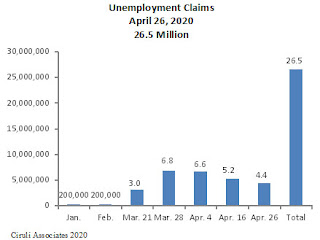