Americans Support Mail-Back Voting. Colorado Got Theirs in 2013.

Colorado, with four other states, has successfully voted by mail in presidential elections, but after the controversy in the Wisconsin presidential primary and postponements of several primaries (New York just cancelled) due to the pandemic, the issue has become urgent for people around the country. Polls show that super majorities of Americans support mail-back voting. President Trump has framed it as a partisan issue, damaging Republicans’ prospects in the upcoming elections and claiming that it leads to voter fraud. And, indeed, polls show Republicans are less supportive, although more than 50 percent support it in several polls. But the issue appears to be gaining adherents, especially in Democratic-leaning and swing states. 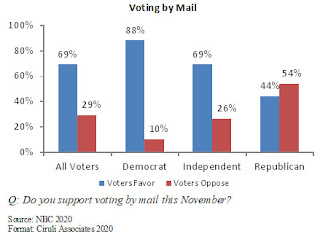 Four states have mail-back voting now besides Colorado – Hawaii, Oregon, Utah and Washington. Many others (33 states) have various forms of absentee voting without an excuse, including a number of battleground states, such as Michigan, Pennsylvania, Wisconsin, Florida, Arizona and North Carolina. If the virus is still a threat in the fall, expect even more clamoring for safer voting.