A majority of the American people (51%) now support the impeachment inquiry into President Trump’s Ukraine behavior and 46 percent support impeachment and removal, a 10-point increase of support since July (36% to 46% today). 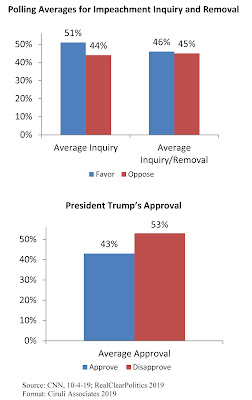 Although President Trump has been losing the early media exchanges due to the events of the last two weeks and their saturation media coverage, it is still difficult to see how support for removal rises much above the approval of his performance (43%). Also, with nearly 90 percent of Republican-identified voters opposing impeachment, anticipating a break by Republican congresspersons and senators from Trump seems unrealistic (favor impeachment: Democrats 79%, independents 44%, Republicans 2%, Source: 538).

The key group to watch will be self-described independents. They have been 5 to 10 points less in favor of impeachment than the average. If they start to shift in favor, the numbers for impeachment will surge and numerous Senate and House Republicans in competitive states and districts could lose interest in defending the President.