Growth and No Growth – Top Issues in Colorado

Utah will get the Olympics, not Colorado. Who cares? The state wasn’t all that enthusiastic about getting Amazon’s second headquarters. Citizens are more concerned about traffic, housing prices and gentrification. But in spite of the lack of local enthusiasm, and some firm resistance, Colorado continues to grow. If not quite as rapidly as half a decade ago, it still was in the top seven states in growth from July 2017 to July 2018, with 79,000 new residents. The state was ranked with Nevada, Idaho, Utah, Arizona, Florida and Washington. After Colorado, rounding out the top ten were Texas and North and South Carolinas.

Historically, just about the time anti-growth forces get motivated and organized for serious limitations, a recessions starts. Many economists now predict a recession during 2020. The last peak of anti-growth energy in Colorado was in 2000 with a statewide growth limiting ballot initiative. The dot.com bust began an economic slowdown the next year, which translated to a lower growth rate during the decade. 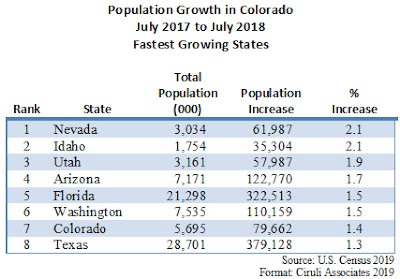 New Congressional District
The nearly 80,000 new residents is down slightly from the 101,000 mid-decade influx from July 2014 to July 2015. But this year’s increase contributes to the 666,000 additional residents since the last census in 2010, ranking Colorado one of the fastest growing states for the decade and likely to be the recipient of a new congressional district.

The state joins Arizona, Florida (2), North Carolina, Oregon and Texas (3) projected to pick up new districts. It’s not clear where the district will be located, but all the current districts will lose some population to create the new one. Also adding to uncertainty of location, a new commission will guide the process. With about 5.7 million residents, Colorado’s current seven districts have about 800,000 residents, with considerable variation among them. The new eight districts will have 712,000 each. All seven current House districts will see some geographic, demographic and political change. Like musical chairs when the music stops, the year 2022 will have new candidates searching and old incumbents scrambling for seats.
Posted by Floyd Ciruli at 10:44:00 AM

" the year 2022 will have ... and old incumbents scrambling for seats."
Not DeGette. Another application of embalming fluid and she will be good to go in CD-1.