The three were primarily responsible for the design and then passage of Obamacare. Waxman, from his perch as chair of Energy and Commerce, and Miller, as her major lieutenant and caucus protector, are the last of the House’s Watergate class of 1974.

The two veteran Congressmen realize that their four-year wait for restoration of a Democratic House majority, their chairmanships, and Pelosi’s speakership have faded. The irony is that their greatest victory, the Affordable Care Act, was the major catalyst for the rise of the Tea Party and the loss of the House in 2010. And, their vulnerability today is primarily caused by the ACA. Democrats will not only not pick up seats, but could well lose some. 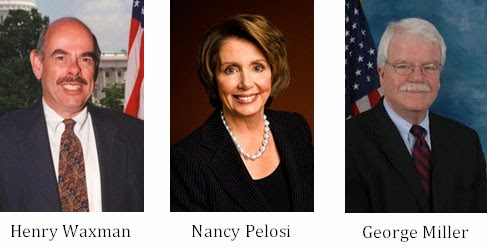 Pelosi says she’s running and gives no hint she will join her exiting friends and colleagues. But, of course, she has to plow ahead. Her main contribution to the House Democrats running this year is raising money, a role in which she has been prodigious. Any hint that she’s retiring, and the money would stop. In fact, the Waxman/Miller retirements are strengthening the narrative that Democratic money is going to start shifting to endangered Senate Democrats and not the longer-shot House majority.
Posted by Floyd Ciruli at 12:13:00 PM