Although the firm’s methodology is unique, and before a definitive observation can made, additional polling firms will need to weigh in the trend is clearly down.

Ritter has struggled through a difficult legislative session, appearing to be behind the economic crisis and seldom in front. His administration’s initial estimate of the downturn was ridiculously low and his budget cut suggestions inadequate or mostly ignored. He weighed in on the Pinnacol controversy late, looking like a follower and not a leader.

His selection of Michael Bennet to replace Senator, now Interior Secretary, Ken Salazar, still rankles the base of the party. And, his support for unionization of state employees and then tightening down on gas and oil industry operating procedures remain sore points among state business leaders, souring their potential support of his economic development efforts and new transportation expenditures.

However, in spite of poor approval numbers, governors tend to be re-elected in Colorado, and there is no doubt Ritter is working very hard to appeal the Democratic Party’s and state’s various interest groups. In addition, President Obama and the Democratic agenda in Washington remain popular and with considerable momentum, creating a positive environment for local Democratic officials. 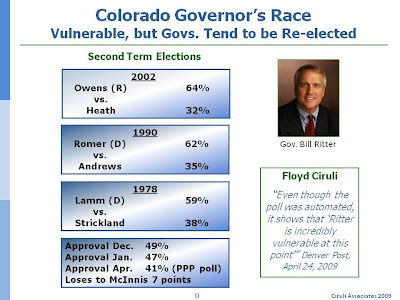