Can Trump Hold the Line?

The Buzz regularly reports the political numbers. The table below has been updated monthly starting in April.

President Trump is aware his biggest problem is that his massive national polling deficit has spread to battlegrounds states where the vote is closer, but still significantly in Joe Biden’s favor. Republicans are in serious danger of losing the Senate in states where Trump is behind Biden, such as Arizona, North Carolina and Maine. Even until recently, seats thought safe are in play, such as Montana and Iowa.

RealClearPolitics currently rates the Senate with leaning and secure states as: 46 Democrats, 47 GOP and 7 toss-ups. When they distribute the toss-up seats by the available polls, the result is 52 Democrats and 48 Republicans, a source of concern for Mitch McConnell and the Republican majority.

As President Trump’s national and especially battleground state polling position has declined, a critical question becomes: Can he hold Republicans in line? He knows that respect or friendship for him among Republican colleagues is thin, but even among the most loyal, political survival is foremost and senators, governors and representatives are going to start looking for some separation. 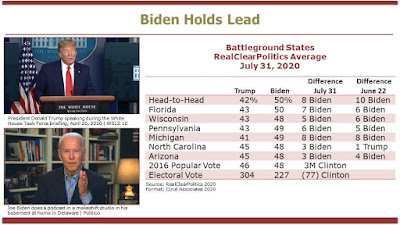 The President hopes his numbers improve to reassure nervous colleagues. He has attempted some adjustments in his behavior related to the pandemic, changed campaign managers and dramatically stepped up campaign advertising, but there’s no relief in sight yet.
Posted by Floyd Ciruli at 9:15:00 AM