Since Donald Trump was elected president in 2016, the El Paso County electorate grew by 23,000, but Republicans – the historically dominant party – lost 9,000 voters. The big gains were in unaffiliated registrants of 31,000, with the still minor party Democrats growing less than 1,000.

The surge of unaffiliated voters, which parallel state increases, reflect changes in the law, which now allows unaffiliated voters to participate in partisan primaries of their choice and automatic unaffiliated registration for new driver license recipients.. But, the shift is also being caused by the swarm of new young Colorado voters not enamored with either party, but especially the Republicans.

Another factor is alienation from the party among some longtime, more moderate and establishment-type Republicans. The El Paso Republican Party has absorbed many social and political movements during recent decades that have shifted its attention from Evangelical voters and cultural and moral interests, to the Tea Party and its anti-tax absolutism, and now Donald Trump’s personality and his issues. Some Republicans, offended by one or more of the movements, its leaders or intensity, have drifted to unaffiliated.

I told Pam Zubeck of the Colorado Springs Independent that:

“The Republican party is in a transition in which their most visible officeholder is Trump,” Floyd Ciruli, political analyst and pollster in the Denver area, tells the Indy. “He’s essentially repositioning the party, both based on his personality and the issues he emphasizes, and the fundamental base of the party is less the party we’ve known for many, many years as kind of a Main Street, small business party that I think was so dominant in Colorado Springs.”

While the open primary has caused more people to ditch the parties, Ciruli notes, “The fact that it is having a bigger impact on Republicans is a sign that the party is in transition. I think just being able to say, ‘I’m an independent’ is more important today to more moderate Republicans than it was in the past.”

Moreover, Ciruli says, polling data shows that more unaffiliated voters ask for Democratic than Republican ballots at primary elections. In the 2018 gubernatorial election, when Democrat Jared Polis won his primary and Walker Stapleton prevailed on the GOP side, unaffiliated voters sought Democrat ballots over Republican at a rate of two to one, he says.

And since the unaffiliated numbers have grown from about a third of Colorado voters to 40 percent, it’s possible Democrats can expect a growing number to vote their way, he says. Data shows unaffiliated ranks in El Paso County ballooned by a whopping 24 percent since November 2016 and by 21.3 percent statewide. There’s another factor at play as well, Ciruli says.

“A lot of young, educated individuals who are more liberal tend to register unaffiliated.” 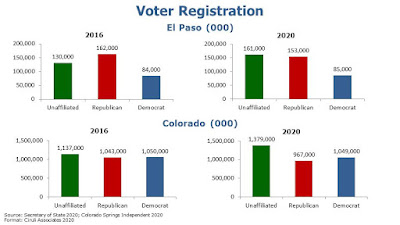 In Colorado, there is no point in being a member of a politcal party unless you wish to participate in insider party activities.
I see zero significance in the labled GOPers not growing.
Lambchop will be re-elected.