Cory Gardner started his Senate TV advertising with a traditional Colorado-type ad emphasizing the themes that were more common in politics a few decades back: nonpartisan attitudes and working for the state. The ad uses news footage of getting masks through contacts from his Senate experience in the Far East. It includes Governor Polis praising him and highlights his non-partisan efforts.

Gardner is trying to simply improve his image, while Democrats are distracted with their June 30 primary. Gardner has been the target of a host of negative attack ads from left-wing PACs and advocacy groups. He is considered the most vulnerable Republican incumbent up in November. Recent polls have him running behind even President Trump in voter favorability.

On May 14, John Hickenlooper and Andrew Romanoff held a Zoom forum. Few noticed. Romanoff wanted a debate and tried to land a few punches. Hickenlooper used the format to mostly stay above the fray. No real winner and not much of an audience. Zoom is a difficult platform for a debate and the Democratic Party isn’t encouraging a fight. 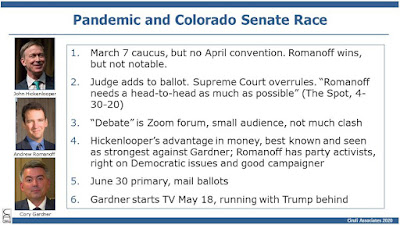