The pandemic threw Colorado’s 2020 petition process into a gridlock. In response, Governor Jared Polis just changed the rules of signature collection and has added chaos to the environment.

Typically, Colorado has a half dozen to a dozen propositions on a November even-year ballot. This year, petition proponents – mostly on the left – saw an opportunity for their favorite causes, from tax changes (increases), to fracking limits, to paid medical and family leave. Initially, a record 318 initiatives were filed. And at least 24 are ready for circulation. But, they were all waiting for the stay-at-home order to be lifted to start circulation.

But Polis on May 15, with a long-standing inclination for controversial ballot initiatives – witness his 2006 Amendment 41 on lobbying or his 2014 oil and gas initiatives – listened to the liberal advocates and changed the rules. Due to the Governor’s rule change, the two dozen initiatives lined up could use the new mail and email rules, which may make it much easier to achieve the needed valid signatures of 124,632.

The state’s business and public affairs establishments rushed a lawsuit that is likely to add more delay and confusion to the process. Polis had been on a roll on executive orders. He may have run out of luck on this one. 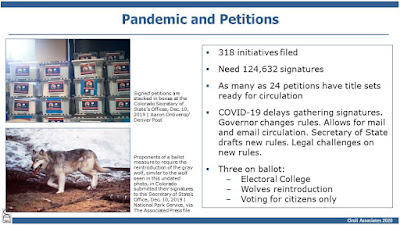