Dow Fires Past 29000, Yet Trump Struggles 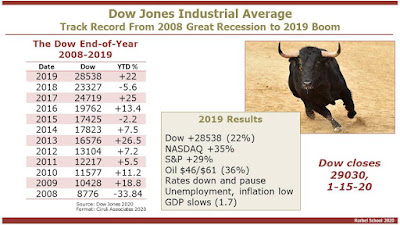 Yet, Donald Trump struggles for re-election. Although his economic performance rating is a high 54 percent approval, his overall job approval seldom gets above 44 percent, an “iffy” position for re-election. The 10-point plus difference is the swing that makes the election unpredictable. Many of the swing voters are moderate Democrats and independents who find Trump’s personal style, tone and ethics a problem.

Also, the expansion has slowed (GDP 1.7) and is uneven. Manufacturing and business investments are underperforming. And, of course, Democrats argue that the economy and Trump’s policies are unfair to a majority of the public and are highly skewed to the rich. Today, the intense polarization undermines the credit politicians get for the economy. Finally, after a long expansion, voters often shift attention from the economy onto other issues, most of which primarily help Trump with his base, not swing voters.
Posted by Floyd Ciruli at 2:18:00 PM