Dates Selected for First Democratic Debate. Will Hickenlooper Make it?

In about 10 weeks, the Democrats host their first debate (June 26-27, 2019). There are 18 announced candidates, and a dozen are raising money and have some awareness, if slight, among the Democratic electorate. Those are the two criteria to get onto the debate stage.

Debate entrance criteria:
John Hickenlooper has hit one percent in the national polls (not consistently), but his fundraising is lagging behind the top candidates. He raised $2 million in the first quarter, with only modest amounts of it from online contributors. He might argue that it at least puts him in the top eight, even if at the bottom. 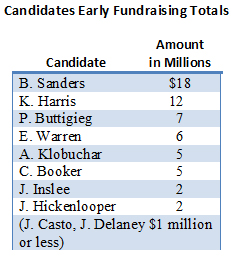 "Will Hickenlooper Make it?"
Hopefully not.
Then he can concentrate on doing someting useful.