Is Scott Tipton in Trouble?

The Denver Post reported on October 12 that Republican Congressman Scott Tipton is in a “toss-up” race according to FiveThirtyEight, Nate Silver’s political rating website. Silver must see a massive blue wave that is going to help Democrat Diane Mitsch Bush. No polls have been published, and Tipton’s re-election track record is impressive. 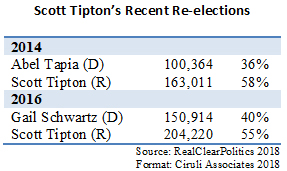 I told Anna Staver, the Denver Post reporter, that I appreciated her story, but short of an extraordinary event, a PhD in sociology from Steamboat Springs, was going to be a hard sell in many parts of the district, but especially Pueblo.
Posted by Floyd Ciruli at 2:54:00 PM