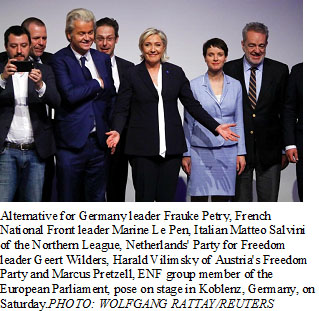 The inaugural speech itself has many anti-establishment and nationalist lines that appealed to Europe’s right wing political groups.


“For too long, a small group in our nation’s capital has reaped the rewards of government while the people have borne the cost. Washington flourished, but the people did not share in its wealth. Politicians prospered, but the jobs left and the factories closed…Every decision on trade, on taxes, on immigration, on foreign affairs will be made to benefit American workers and American families. We must protect our borders from the ravages of other countries making our products, stealing our companies and destroying our jobs.”

Marine Le Pen, the highest profile participant, said about Trump, “He will not support a system that oppresses the people.”

The European elections in 2017 will provide numerous opportunities to advance the candidates and agenda of the right starting on March 15 with Dutch parliamentary elections under the well-established leadership of anti-Islamist Geert Wilders. Elections are scheduled or are likely in France, Germany and Italy and in each, populist forces are energized.