Like the stock market crash of 1987 labeled Black Monday, the drop in the Dow on Thursday, March 12, 2020 was a record breaker. In fact, when the circuit breaker (trading curbs) went off as it dropped past 7 percent, it harkened back to Black Monday as the curbs were reforms instituted after the October 19, 1987 crash. The 508 points, or 22.61 percent, drop was and remains the historic record. The Dow was only 2246 when the bottom fell.

Last Monday’s drop is now second place in percentage loss. However, it is the new historic point loss in a string of huge recent losses that have the market down 32 percent, or more than 9000 points off its February 12 high of 29551.

Relatively new computer-driven trading programs got the blame for the sell-offs in 1987, along with a disorderly market overwhelmed by the volume. The Federal Reserve moved quickly to calm the market, new regulations on trading were enacted and a bear market was not signaled. But today’s crisis is far more ominous.
Hence, there will likely be more sell-offs until a bottom is reached. We have entered a bear market and a recession. The Dow may give up all its gains since Trump’s election. The novel coronavirus is an unprecedented shock and will test the economic fundamentals of the U.S. 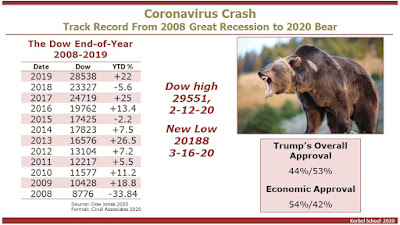