Democrats Winners in Late Registration, But Republicans Still Ahead

Democrats reduced the August vote gap in voter registration from 110,000 to 70,000 as registration closed in early October.  More than 260,000 people registered or reactivated to vote. 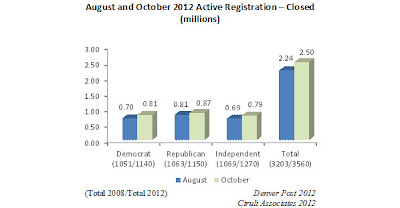 There are 3.560 million registered voters, both active and inactive, which is a new record and exceeds the 2008 total registration by 330,000.

See:  The Buzz: Republicans still ahead in voter registration
Posted by Floyd Ciruli at 10:01:00 AM