Both parties are targeting a host of western senate and governor races in the November election.  Republicans need four seats to take the Senate.  They believe there are at least two pick ups in the West – battlegrounds are Montana, New Mexico and Washington. Democrats are fighting to pick up seats in Arizona and Nevada.

Tester first won during the 2006, the Democratic national congressional election high point, and has hewed to the moderate approach essential for Democrats in Montana.  The latest PPP poll of April 29 shows Tester 48 percent and Rehberg 43 percent.

Polling indicates seven-term U.S. Congresswoman Shelley Berkley of Las Vegas is in a tight race against Republican U.S. Senator Dean Heller, who was appointed to the seat – Senator John Ensign resigned in May 2011.  An interesting side issue is that Berkley is Jewish from the state’s Democratic heartland.  Heller is a Mormon from the state capitol, Carson City.  (PPP poll of April 1:  Heller 46%, Berkley 43%)

Nevada will be a targeted state in the presidential race.

The open senate seat promises to be one of the most competitive in the country.  The June 5 primary will settle the Democratic contest.  Democratic frontrunner Martin Heinrich is likely to win and is currently ahead of his Republican opponent.  Heather Wilson is the Republican candidate and the top fundraiser in both parties.  There will be millions of out-of-state money spent winning this seat.  (PPP poll of April 22:  Heinrich 48%, Wilson 43%)

Representative Jay Inslee leads Republican Attorney General Rob McKenna in the latest poll, but the race should be close in spite of a likely Obama presidential win (Inslee 38% to McKenna 34%). 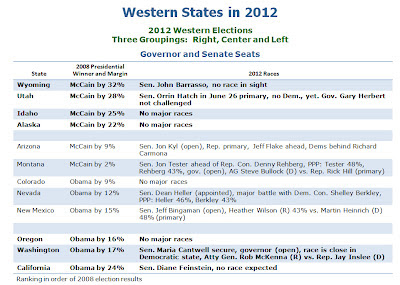