Money in Congressional Races – Only One Factor

Campaign contribution figures are not dispositive of identifying competitive races, but along with factors, such as partisanship, and the quality of the candidates, they highlight where the main interest groups are lining up.  The first quarter congressional finance reports reinforce the view that the southern and western Colorado 3rd CD is the state’s top race, with Sal Pace (D) vs. Scott Tipton (R) in third place for money raised, $600,000, and cash on hand, $1.3 million.  What makes it the top state race is the closeness of the fundraising.  Incumbent Tipton only has a 60 percent to 40 percent advantage.

Other races with considerable cash on hand are Shaffer (D) vs. Gardner (R) in the 4th CD and Miklosi (D) vs. Coffman (R) in the 6th CD.  But, the Democratic challengers are substantially behind the Republican incumbents (20% to 80%), indicating the races are not seen as competitive as of the end of March.  However, Miklosi has just been endorsed by the DCCC as a targeted race.  It could bring $2 million or more in contributions. 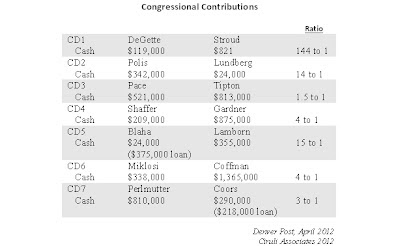 The surprise race that has potential to be a spirited fight is Perlmutter (D) vs. Coors (R) in the 7th CD.  Joe Coors’ personal contribution of $218,000 puts the race at the million dollar level of cash on hand.  The incumbent to challenger financing ratio is 75 percent to 25 percent.

With little or no tangible assets Startups, have hard time being approved for a bank loan or banks are not willing to extend credit.
Traditionally banks will not consider loaning to Startups who have been in business for fewer than 3 years because of the high failure rate.
If a business does receive a bank loan, this adds another payment to the company’s expense column, which further cramps cash flow,
rather than freeing it up for growth and expansion. However, there are Invoice
factoring company,
such as CBAC Funding, handle your invoice – including the remaining balance.