Miklosi vs. Coffman: The Closest Seat in the Country

Colorado’s newly designed Sixth Congressional District is in nearly perfect mathematical balance and may become one of the country’s most competitive districts.

If Joe Miklosi can match Congressman Mike Coffman’s financial resources, and he is helped by an aggressive Obama ground game in Arapahoe County, this should become a very close match. 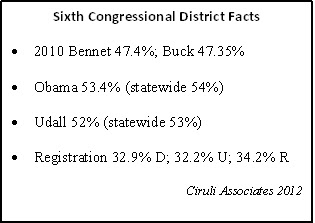