Nineteen candidates out of twenty are left for the second round of Democratic debates. Many of the 12 that only have one percent or less in polls may be joining Eric Swalwell after August 1.

Top nominees to drop out are: Delaney, Gillibrand and Ryan.

Hickenlooper, who appears to be running on fumes, claims he’s moving to Iowa to see if he can reverse his failed national campaign. That strategy is likely to be a longshot effort since he’s already been there for months with little to show for it. And, all the major candidates who already have a presence there will be soon joining him. 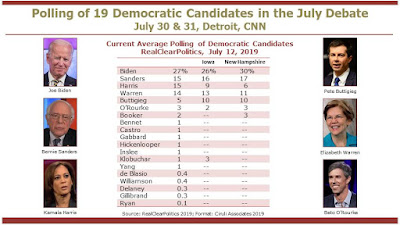