As expected, Romanoff won the top position in the preference poll with 55 percent, carrying the metro area handily. Hickenlooper, who hit (31%) the threshold (15% for successful petitioners) to win a ballot position, carried a few non-metro areas, such as Mesa and Montrose on the Western Slope and Prowers on the Arkansas Valley.

Romanoff tried to characterize it as a rejection of the establishment (the “D.C. machine”) and a victory for his “progressive values.” Reporting from caucuses seem to indicate that many Democrats, who are desperate to win the race against Cory Gardner and Mitch McConnell, are mostly concerned about Hickenlooper’s commitment to the race. 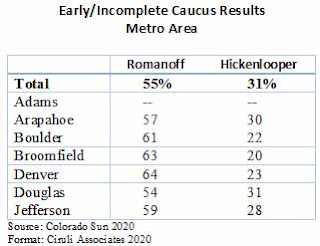 It should be noted that the estimated 14,000 caucus attendees is one percent of the party, or 1.5 percent of even the Democrats that voted on Tuesday, March 3 in the presidential primary. A majority of these participants tend to be liberal activists and represent the party’s interest groups.

Hickenlooper’s advantage with most Democrats is the same as Joe Biden’s – the assumption he has the best chance of winning in November. But, the Democratic State Convention in April and the June 30 primary will be a test of his candidacy and stamina for punishment.

Read The Buzz:
Will Bernie Sanders Defeat John Hickenlooper?
Posted by Floyd Ciruli at 10:51:00 AM