The Trump Correction. Dow Off 4000 Points Since October 3rd

The Dow, largely in tandem with other indexes, is deep in correction territory (off 16%, with 10% a correction). In fact, the technology-heavy NASDAQ is more than 20 percent off its recent high (22%), or a bear market. The Dow has given up more than half of the 7000 points of gain since Donald Trump was elected in November 2016. As the holiday break begins, the Dow has fallen 4383 points since its all-time high of 26828 hit on October 3 of this year. That’s a steep decline, much like the unbelievable ascent from 19000.

As the chart below shows, the Dow is now back to October 2017. 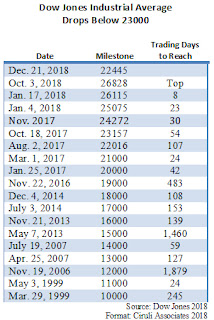 President Trump has relished taking credit for the market, especially as the politics of Washington during his first two years have been so chaotic and his character so confrontational. As 2018 ends and the presidential race begins in 2019, it appears Trump will not have a market as a talking point or a distraction for other problems.

Although the American economy continues to appear robust, and few economists see a recession, a host of warning signs are producing volatility and a more risk adverse investor.
In terms of U.S. politics, nothing as 2019 begins appears calming for markets, Trump’s White House is ever more chaotic as Democrats prepare to take over the House, the Mueller investigation grinds along to an expected 2019 conclusion and Congress appears unable to reach a deal to keep the U.S. government open.

Read The Buzz:
Market Tops 26616 in January; Dow Drops 2600 Points – Correction Territory
The Color of Green
Trump Rally is Over
Posted by Floyd Ciruli at 3:01:00 PM

Floyd, please say it an't so.
How good a nice Catholic boy who grew up with Latin write indexes instead of indices?