Loss of Confidence in Public Education May Hurt DPS

As Denver Public Schools considers asking for hundreds of millions of new money, the national backdrop of public education is not positive.

The Gallup research organization, which has a long track record in measuring Americans’ viewpoints about public education working with supporters, just published its latest survey showing confidence in public education has hit a new low of only 29 percent. 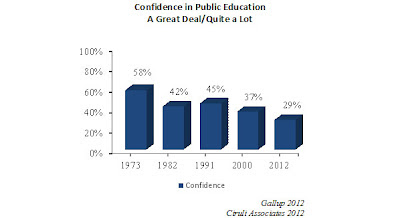 Confidence in public schools collapsed in the last fifty years, from 58 percent to 29 percent.

Although Democrats are slightly more confident in schools, in fact, only one-third (36%) claim a “great deal” or “quite a lot” of confidence.

Schools now tie the criminal justice system and are behind the military, small business, organized religion and the presidency in public confidence.  They are ahead of unions, banks, organized labor and TV news.

Unfortunately for public schools, they are associated with organized labor, which fared even worse in public confidence.

Although the Denver Public Schools has most of the problems of urban school districts, it has fought visible battles with unionized anti-reform forces and mostly won.  But, with confidence in most public institutions low and the economic recovery slow, the expensive proposal the DPS citizens committee recommended may have to be aggressively trimmed by a more realist school board.