High-profile freshman Congressperson Rashida Tlaib, best known as the first Palestinian-American woman to serve, became a viral sensation in the meeting after her swearing-in saying: “We’re gonna go in there and we’re going to impeach the motherf---er.”

She claims this is how people in Detroit talk. Most of her Democratic colleagues believe it was an embarrassment and just helped the Republicans and President Trump.

Republicans immediate piled on saying it showed that so-called Democratic “oversight” is just politics. Of course, Trump used it to reinforce the conservative talk shows’ position that impeachment is a Democratic coup d’état. Trump then launched his re-election meme in a tweet. His main points of typical hyperbole are: 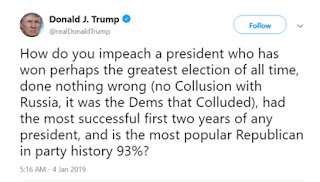 This early misstep may be a lesson to other freshmen that there is a serious cost for incivility and hyper-partisanship.

Read Politico: Dems livid after Tlaib vows to ‘impeach the mother---er’
Posted by Floyd Ciruli at 9:27:00 AM

If that is the motherfucker's re-election meme, then he has some revisions to make.
"Most popular with his own party"?