Polls in 2020 received criticism, but statewide polls in Colorado were consistent for more than a year – President Trump would lose and John Hickenlooper was a very strong candidate against Republican incumbent Cory Gardner. Indeed, Trump lost by 13 points and Gardner by 9.

A part of that loss was a reflection of Gardner being associated with an unpopular national ticket. President Trump lost Colorado by 5 points in 2016, and instead of expanding his reach, he focused on a conservative Republican base. In Colorado, that is about 40 percent of the electorate. Hence, he added another eight points to his loss.

In addition, the 2018 midterm showed the state had become more unaffiliated and bluer in the intervening years as it awarded Democrats across the state and in particular counties, 10 percent wins. Trump made a bad situation worse. 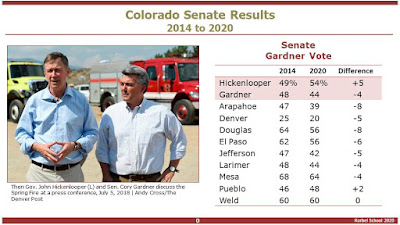 Finally, Hickenlooper began the race in the late summer with a ten point lead and near universal name identification, mostly positive, even after a misbegotten presidential race. During the senate race, he was able to withstand a massive advertising attack on his reputation and character, yet not panic and stay mostly on message.

As the above chart shows, among major counties, Gardner’s support dropped 4 to 8 points between his 2014 close victory over Mark Udall and his 2020 9-point loss to Hickenlooper. Six years ago, he ran close in the Denver suburbs of Arapahoe and Jefferson, but this year, his support dropped 8 and 5 points, respectively, a major loss that added to the huge Democratic vote in Denver and Boulder doomed him. But even in Republican strongholds of El Paso and Douglas, he lost support (-8 and -6 points, respectively). Support mostly held in Mesa and Weld counties and he managed to gain support in Pueblo.